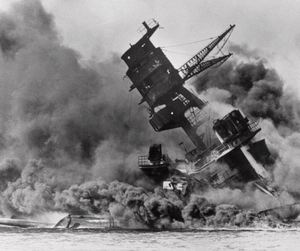 Don't forget about this event. Add it to your calendar.

Let your friends know about this event! Share it on social media.

Historical Presenter, Jim Gibbons, will present the story of Pearl Harbor. On December 7, 1941, the United States was suddenly and deliberately surprise-attacked by Japanese Naval and Air Forces and then thrust from isolationism into World War II. Gibbons will show you the beginnings of the storms of war that led to the predawn attack. He will explain how our government in Washington and the people of the United States were wooed to vulnerability and then struck hard by the Empire of Japan. Suffering a devastating naval loss in a little over one hour and fifty minutes, the United States now had the catastrophic record of more losses in less than two hours than its entire navel losses in World War I. Finally, Gibbons will show you how the people of the United States, as President Franklin Delano Roosevelt stated, “In their righteous might [did] succeed to absolute victory!

When you register for this event, we will email you a link to a Zoom meeting. Participants must have a phone, tablet or laptop in order to participate. If you need any help, please send us an email at cstream@cslibrary.org or call us at 630-344-6123.